You know where you are with Dagger Debs… 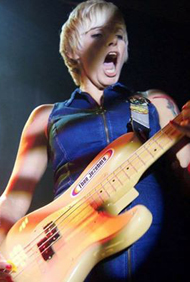 Our Letty treats her thumpin’ bassline like she does her marathons; relentless pace and a lot of sweat. You may recognise her from all manner of musical exploits around the South Coast area as well as her DJing pseudonym Mz Siren. Pint of Guinness and mushy peas.

Having been in all sorts of musical outfits from the age of 14, our screamin’, Epiphone SG-slingin’ frontwoman is happiest either on stage or propping up the bar. Also a DJ, she regularly spins her rekkids both in London and the rest of Europe. Lager top.

Wonderful Delia! Part of the country’s underground garage scene for a couple of decades, our Delia’s multi-instrumentalist skills are serving her well with us, as well as with all-girl Monks tribute band Ye Nuns. Red Wine and coca-cola does the trick.

The story of Dagger Debs starts in 2011. Back then, Laura and Letty played together in an all-girl Beat/Garage band called The Neasden Bees. Time marched onwards and in 2014 Thee Jezebels were born. Following a tour of Spain and gigs across the U.K. they built up a fan base and released their debut single Black Book/Cried Over You followed by a four-track E.P. Mover and a Groover on State Records.

After a line-up alteration, Thee Dagger Debs formed with a new drummer, and were promptly snapped up by Damaged Goods Records. The band’s mutual love of all things pub-rock, glam, proto-punk and rhythm ’n’ blues unifies their sound. With lyrics discussing misogyny, love, liars and cheats, along with the storming all-nighter tune 8 while 10, their live shows entertain from start to finish.

The girls have shared the stage with bands such as The Flamin’ Groovies,  Eddie and the Hot Rods, Johnny Moped, Giuda, The Masonics, The Wildebeests, Graham Day and the Forefathers, The Beatpack, Spanish pub-rockers Los Chicos, and have built up a following both in the UK and across Europe, renowned for their sweaty, high-energy rock ‘n’ roll gigs, followed by happily propping up the bar and dancing ‘til dawn.

They promise to save you from the dull times, and will be coming to a town near you!